Hey readers I apologize for the highly (?) anticipated Yadi card of the week but I was recently promoted and the time I spend writing my weekly entries before I start has been reduced but I hope this gets less so in the future. So with out much ado here is the Yadi card of the week. This week’s card is the 2005 Bowman Draft #BDP17, which includes the chrome version as well.  This was one of the first cards we picked up for our collection. The photo is what I call of the mug shot variety. A Birds on the Bat on up shot of Yadi in the home whites framed in black with his name along the bottom in a silver box, the Bowman logo in the type left corner and Bowman Chrome in the bottom right corner. I really don’t care for this picture because it looks like it was taken in a closet. However the reverse of the card makes up for dial it in front. The rear has a background of brown and an action shot of Yadi in a small box to the right of some really good information on Yadi. His name in in the top left corner above the Bird of the Bat and his vitals to the right of this. At the bottom are his 2004 MLB stats. His 2004 stats are as follows he played in 51 games had 151 plate appearances, scored 12 runs, had 36 hits, 13 walks, 20 Ks, with a batting average of .267 and a an OPS of .684.  Defensively he caught 344 innings with a fielding % of .993, 9 stolen bases against, with 8 would be base stealers thrown out. 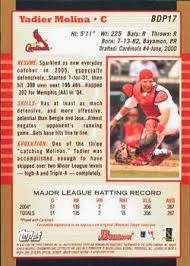 The draft issue comes in several parallels including gold (have), and white (have). Whole the chrome issue comes in gold, refractor, x-fractor (have), and blue refractor. A have seen a few blue versions on eBay but they are out of my price range. Also, late last year the 1/1 red version came up on the bay and went for over $100.