STL MLB Player of the Week #12

This week’s STL player hails from across the river in ESTL. ESTL is still going through deindustrialization resulting in a steep decline of this blue-collar city. I am 46 years old and when I was very young my parents would take me to get my haircut at my Uncle Nick’s barbershop on Main Street. I don’t think I could do so now.

"He was great for the Karl Young League. Salty would help anybody who asked him. He was one of the few people in baseball I knew who would never say a bad thing about anybody -- even if they couldn't field or play a lick."


Even though he had a short career as a player he has several cards as a coach with several teams including 1960 Topps #469 Giants Coaches, 1973 Topps #276 Angels Coaches, 1974 Topps #276 California Angle Coaches, and 1987 Seattle Mariners Bellingham Mariners 1987 team issue. 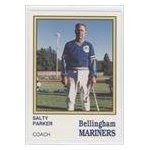