Better than a Blaster #4

Description of lot from eBay.

The lot contains the following Hall of Famers:
Ozzie Smith, Whitey Herzog, Joe Torre, Red Schoendeist, Stan Musial, Joe Garagiola
It contains the following Superstars and future Hall of Famers:
Mark McGwire, Lee Smith, Chris Carpenter and more.
Please see scans. The cards in the scans are the actual cards you will receive, no stock photos here!
COULD NOT FIT ALL THE CARDS IN SCANS, THERE WAS JUST TOO MUCH GREAT STUFF!

This is a great lot for any Red Birds fan you know.”

I guess I am getting to the point where large card lots of Cardinals cards may not be the best way to obtain new cards unless the they are "cheap". I purchased this lot based on the assumption, as indicated by the description, it would include cards from the late ‘70s through 2007. With the exception of one card from 2007 (Fleer Jason Isringhausen) there were no cards 2000 or later. I believe the description was misleading. On the bright side I was able to add 274 cards to the collection but at 6 cents a pop for junk wax it was no bargain. Now granted if I needed all of the cards the price would have been 3 cents. So I have no issue with this because as I said before lots may not be the way to go for large numbers of Cardinals cards. However there were some highlights in the lot including: 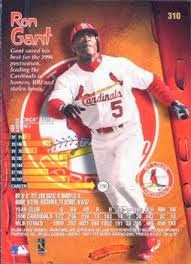 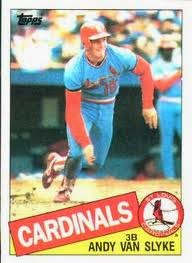 I really like the mid to late '90s higher end cards for their beauty, their design, and their photography. I can't complain too much buying cards at a nickel per, but I can complain that I was expecting cards through the 2000s which I need more of. All in all this lot gets 1.3 blasters out of 3.
Posted by Man at 5:01 AM