STL MLB Player of the Week #15

In honor of the Yankees interleague visit to STL the player of the week is Lawrence Peter “Yogi” Berra. Yogi was born in “The Hill” part of STL. Originally this area was where the Irish settled, then Spanish folks, and finally Italians. This is where Northern Italians immigrated to including Yogi’s Milanese parents. I am half Sicilian and Little Sicily was located in the area where the Rams play in the What Ever it is Now Called Dome. If you ever visit STL The Hill is great place to walk around eat canolli from Missouri Baking Co., shop for some salciccia (sausage) and salumi at Volpi (which I can buy here in CA which is nice), or sit down for a really good meal. Again, I digress so back to Yogi.  Oh wait a further digression; I went to college with one of his great nephews. The Berra family is prominent in STL.

Yogi began playing in the local American Legion league and it was during his time in this league he received his nickname from fellow player Bobby Hoffman who thought he looked like a Hindu Yogi because of the way he would sit with his legs crossed when he was waiting to bat or when his team lost.  In 1942 the Cardinals passed on Berra and signed his best friend Joe Garagiola. Yogi was signed by the Yankees soon after and then World War II happened. Yogi was in the Navy and was a gunner and was part of the D-Day invasion flotilla. Following WWII he played in the minors with the Newark Bears and played in seven games with the Yanks in 1946.

Yogi hung up his playing cleats following the 1963 World Series. Following this World Series he managed the Yanks in 1964 to the World Series but after losing to his hometown team he was fired. In 1965 he became a player manager for the Mets then after this he coached 8 more seasons with them. In 1972 following the sudden death of the Gil Hodges he was named the Mets’ Manager. He managed the Mets to a World Series in 1973 but the Mets blew 3 games to 2 lead and the A’s took home the title. In 1975 he was fired and his managerial career was over. With the Mets he had a record of 298-302. However he became the manager of the Yanks for the first 16 games of the 1985 season but "The Boss" fired him. He would later become a bench coach with the Astros. In 1972 he was elected the Baseball Hall of Fame. Montclair State University opened up the Yogi Berra Museum and Learning Center and the Yogi Berra Stadium which is home of the New Jersey Jackals and Montclair State University baseball teams in Upper Montclair, New Jersey in 1998 Yogi’s son Dale was a MLB player and his son Tim played with the Baltimore Colts. Yogi is still kicking and currently lives in New Jersey. Here are his 1948 Bowman rookie, his 1949, 1950, and 1951 Bowmans, and his 1982 Donruss. I guess if money wasn't an issue I would collect the Bowman sets which are so classic. 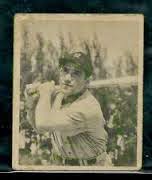 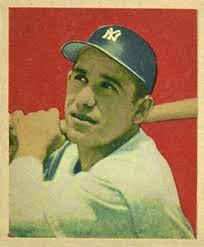 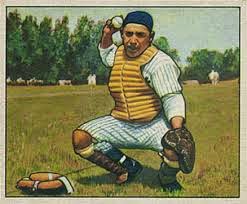 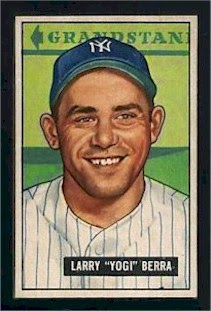 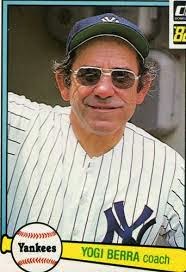