State of the Redbirds

OK, let me say this straight off-I am not a fair weather fan but I do expect quality play, nay I am used to quality play. This year's version of the Birds isn't quality. Yeah sure they are over .500 (but barely) but their record doesn't reflect how bad they are. Let us review the year so far; can't hit home runs, can't hit with runners in scoring position, pitchers can't work smoothly through the later innings, Shelby Miller is over rated, Trevor and Carlos aren't relief pitchers, and Peter B can't hit a lick so to speak. They gave away the last game of the Yanks series, no way they should have won. They also gave away the first game of the Giants' series, again Giants shouldn't have won. The Birds are bringing up Oscar Taveras but I fear he can't save them. I am also starting to doubt that Mike can manage. For example, I can't for the life of me understand why he isn't having Peter B bunt for a hit every single at bat since again he can't hit for crap but is fast as a rabbit.

So today's game might be the last I watch for sometime, and the only reason I am watching is to see Oscar Taveras. In 2011 my wife and I stopped watching in early July 'cause they stunk. Who knows we may do the same thing this year. 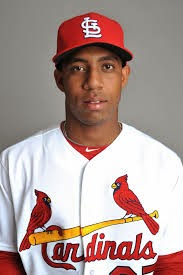