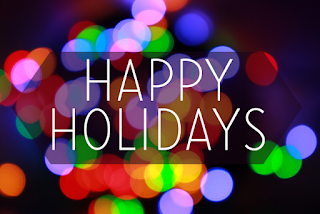 Hello Everyone I wish you and your loved ones a happy holiday season! 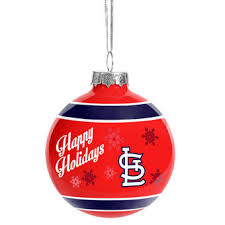 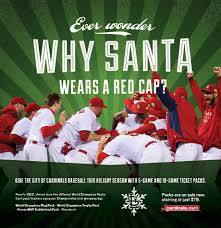 May your gifts include many great cards. Cheers. I will be incognito for a little while.
Posted by Man at 4:38 AM 4 comments:

OK, not technically part of the "Original 6" (Rangers, Bruins, Blackhawks, Redwings, Canadians, Leafs). There were teams in the NHL prior to the 1942-1967. One of which was the original Ottawa Senators, or "Sens" who were founded in 1883. The Sens became a charter member of the NHL in 1917. However, they struggled with their finances until 1931-32 when they suspended operations, this after winning the Stanley Cup in 1927.  I learned that the Stanley Cup was an inter-league championship between the now defunct National Hockey Association, of which the Montreal Canadiens were a founding member, and the NHL. 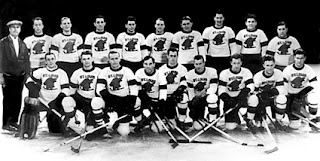 After getting back on their feet they decided they couldn't make a go of it and decided to move to the STL. Yes, St. Louis had a NHL team BEFORE the Blues. The Senators became  the St. Louis Eagles.  However, the Eagles weren't meant to last. Still reeling from the effects of the Great Depression they lasted just one season (1934-35). The Eagles were named the Eagles because they were inspired by the Anheuser-Busch Eagle logo. Interesting enough, Wiki tells me that St. Louis applied for an expansion team in 1932 but were denied because travel to St. Louis was deemed too expensive. The Eagles were in the Canadian Division and had to travel to Montreal and Toronto much of the season. 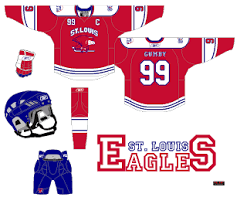 Wiki also tells me the old St. Louis Arena was "Once the Eagles began play the St. Louis Arena gained the distinction of being the only NHL stadium with racially segregated seating." Though there is facto and de facto segregation-I don't take much stock of this shameful part of our past as being unique to STL. No St. Louis was not unique, I am pretty sure if an African-American showed up to watch the Bruins the result would have been the same.

The Eagles weren't that good, lost a ton of money, slashed ticket prices and went 11-31-6.

In 1938, the Montreal Maroons tried to move to St. Louis but the NHL said no again because of the high cost of travel.

Recently I won a number of Eagles' matchbooks. The ever and not so popular Diamond Matchbooks of he 1930s-which encompassed the major sports, including hockey. The ones I picked up were Irvine Frew, Vic Ripley, Glen Brydson, Vernon Ayers, Max Kaminsky, Bill Beverage, and Gerald Shannon.

That leaves Ralph Bowman, Bill Cowley, Frank Finnigan, Syd Howe, Desse Roche, Earl Roche, and Carl Voss. These are the only collectables that resemble in anyway cards. There isn't much out there for the Eagles.
Posted by Man at 8:20 PM 5 comments: 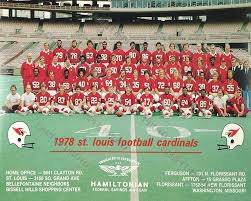 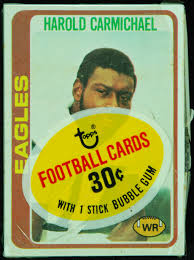 The Big Red lost its first 8 games of the 1978 season including the first team to loose to the visiting expansion Buccaneers.  Needless to say they were out of the playoffs before the half waypoint of the season. 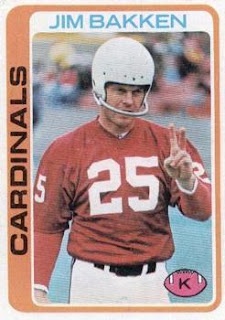 The 1978 team would contain most of the players that would continue their “winning” ways. However, this would be the final season and card of Jim Bakken. Not sure how the Hall of Fame votes him to the all 1960s Decade Team and not to the Hall of Fame? How is that possible? 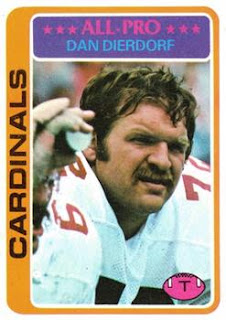 I have to be straight up. I hate this set-hate it-well maybe not hate it but I am still feeling the effects of opening so many cello packs of this. When I was 11 years old and we would go to our local Venture store there was a display of 1978 Topps Cello packs in this huge square dump like you see with discounted videos at Kmart. My parents always bought me packs and I ripped many of them. Apart from this memory I really am not a fan of the design. Topps as would be the case for a few years didn’t have the license from the NFL for them to show team logos. 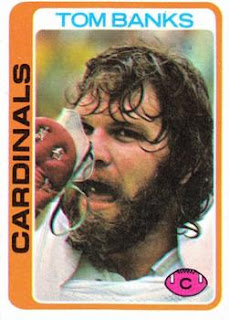 The fronts, where in the case of the Cardinals, framed in a brown-orange with the team name on the left, players name on the top, and position in a little football in the bottom right. Blah! Though in reviewing the set when it arrived I was able to reassess my position on the set and found the photography to show the grittiness that has long left the NFL-and is one of the reasons I don’t care for today’s game. 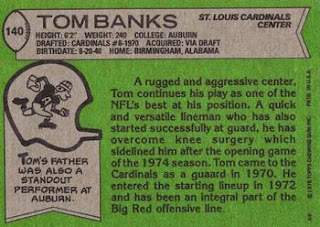 The reverse is dreadful, probably as a result of the lackluster green. A little cartoon is on the left, player info and bio in a pennant at the top, and statistics. 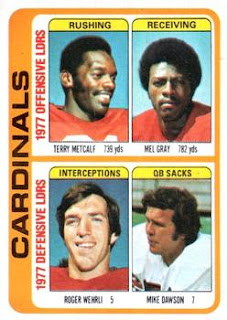 Bye Stephen, I had Such High Hopes for Ya 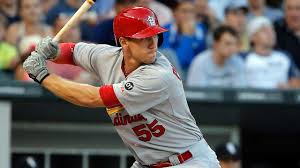 I went to bed last night and woke up to find the Redbirds dealt Stephen Piscotty to the A's for two minor leaguers. Stephen fell off last year and his power declined. Last season wasn't a good one for him in comparison to 2016. 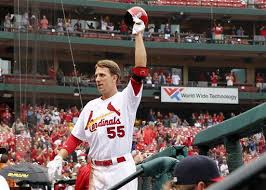 He hit .235 and had only 9 home runs over 401 plate appearances. In 2016 he hit .273 and had 22 home runs. He grew up in the Bay area and will be closer to his mother who was diagnosed with ALS earlier this year. Somethings are more important than statistics. Farewell! 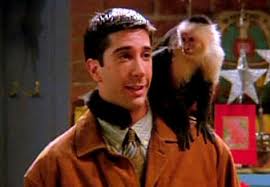 At least the Cardinals made a move that may actually workout. After Giancarlo refused to wave his no trade clause to go to St. Louis the Redbirds still managed to pick up a Marlin. 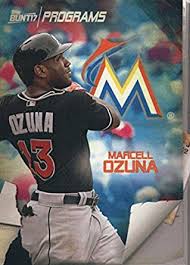 Giving up pitcher Sandy Alcantara (who we saw warming up in SF in August-man is he tall), 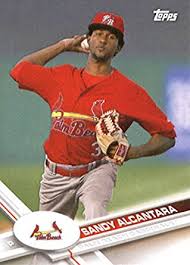 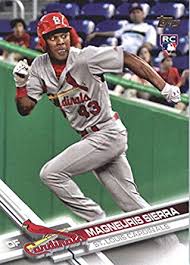 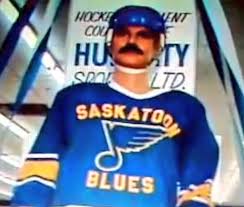 The 1982-83 Blue Note edition is the first team I really, really remember-Bernie Federko, Brian Sutter, Blake Dunlop, Rob Ramage, Perry Turnbull, Joe Mullen, Wayne Babych, Alain Lemieux, Guy Lapointe, and Mike Liut.  However, it isn’t the season that I remember, because it wasn’t memorable. Going 25-40-15 and having a total of 65 points put them 4th in the Norris Division. But hockey being hockey they made the post-season and actually made it the Norris Division Semi-finals during which Chicago would beat them in four games.

No it wasn’t this I remembered but it was the attempt by the Ralston Purina Company to sell the team to the owner of the Edmonton Oilers who had plans to move them to Saskatoon, Saskatchewan. Yep, Saskatoon.  SO, the NHL actually made a good decision and vetoed the deal. The Blues would be sold prior to following season to Harry Ornest and they would remain in the STL. 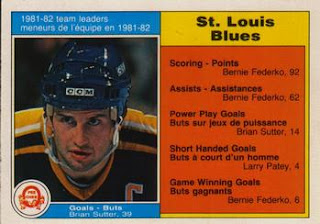 The 1982-83 season would see the absence of Topps from the Hockey card market. Topps would not return with an issue until the 1984-85 season. 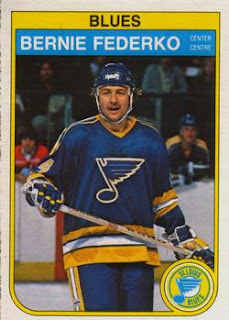 That left OPC the only major card issue for the season. They really knocked the puck out of the arena with this set.  The front of the set has a white border then for the Blues a yellow border then the team player name at the top along with the player’s position in English and French. This would be only the second time since the Blues began to have OPC cards that the position would be bilingual. The other issue was the 1981-82 set. 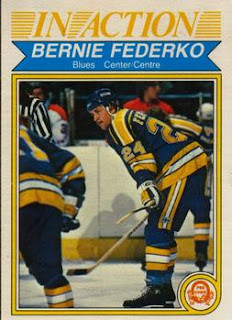 The bottom of the yellow border is rounded and has the Blue note on the bottom right corner. The reverse is a wonderful eye full of hot pink and tanish color. For the record hot ink and purple are my two favorite colors.  While the fronts are vertical the reverse is horizontal. The reverse has the player and team’s name and position in a hot pink box at the top with bio info below along with career stats. The top left has the card number and the top right the OPC logo. There is a factoid on the right. 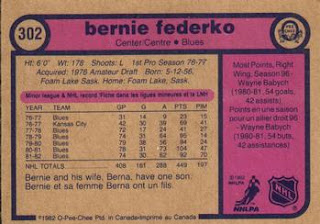 As a result of no Topps being issued this year no need to worry about the different checklists. The following Blues had OPC cards. 16 of 16 OPC cards in collection.

You Pick'em, I Pick'em, We all Pick'em

Hello everyone, time for the annual College Football Bowl Pick'em contest by Kerry over at Cards on Cards. I didn't do so well-but alas I never do! Good Luck! 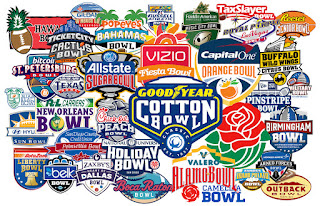 I thought it was just Me 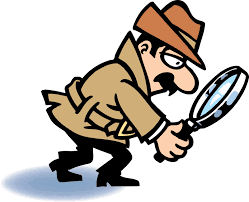 As part of my 2017 great filing project I was going through some 1973-74 Topps' Hockey cards from my childhood earlier today when I noticed something. 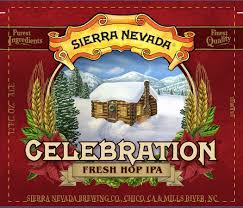 At first I thought it was just me-but I knew I wasn't into several bottles of Sierra Nevada Celebration Ale yet-so I pulled up the Trading Card Database website and proceeded to go through all of the images of the 1973-74 Topps' Hockey cards-and alas it wasn't just me. I was on to something.

If you take away the actual Blues, league leaders, checklists, and team cards you end up with 157 player cards. Of these 157 player cards, 111 are posed studio shots-or locker room-either way this leaves us with 46 game action shots. Are you still following me? 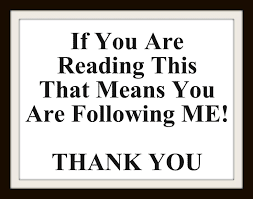 OK good, of the 46 action shots 23 have Blue Notes in their home whites in the shot-either the player is identifiable or not.  Now we are getting there-so, of the 23 remaining action shot cards-2 feature Rangers, 1 Saber and 1 Black Hawk, as well as 1 I can't tell except it isn't a Blue.  We are down to 18 cards. We can eliminate all the player cards from teams except the Atlanta Flames, Boston Bruins, Golden State Seals, Chicago Black Hawks, NY Islanders, Fliers, Rangers, and Penguins. These teams are teams for which there are action shots with Blue Notes and ones that only show the player. I think we can assume that the photos with no other players were taken the same time as the ones with Blues. This leaves us with 10 cards that either show another team in the background OR there is no action shots with any Blues in the background, so I assume these may not have been shot in the STL.  End the end I can, I think, make an educated guess that 78% of all photos in the 1973-74 Topps' set were shot in the STL.

Now I didn't check OPC but since the photos are the same then we can assume that this is true. I did count up the posed shots in the OPC issue and there are 66 more (177) than the Topps' issue. This happens to be the difference in the # of cards in each set- 198 for Topps and 264 in OPC, which is shocking actually.