This edition of MLB St. Louisian has a West Cost vibe to it. The subject of this post is Bill Mueller. Bill was born in on 3/7/1971. He attended the all boy then the “notorious” party school and was drafted by the San Francisco Giants in the 15th round of the 1993 MLB Draft. Bill was a switch hitting right handed third baseman. 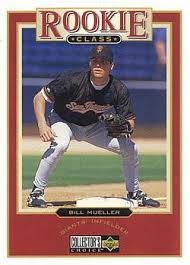 In 1993 Bill made his pro debut with the Giants’ low A team the Everett Giants. Eventually he would reach the big club and made his debut as a pinch hitter on April 18, 1996 against the Cubs. The following day he would have his first big league hit as pinch hitter. Bill would play as a regular with the Giants for the next five seasons. However, he was traded to the Cubs for pitcher Tim Worrell, Cardinals’ legend Todd’s younger brother, prior to the beginning of the 2001 season. However, the stop in Chi-town would be short as the following year he was traded back to the Giants for another pitcher. 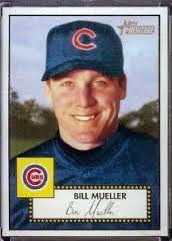 He signed with the Red Sox as a free agent in 2003 and it would be with his new team that he and the Red Sox would take on his childhood team in the 2004 World Series. The bummer for me is the Redbirds were very very good that year-and went 105 and 57 only to get swept by the Sox. Other than the 1985 Series this one is the most disappointing for me as a Cards’ fan. Bill had a remarkable first year with the Sox as he won the batting title with a .326 average and he also had 45 doubles and 19 home runs 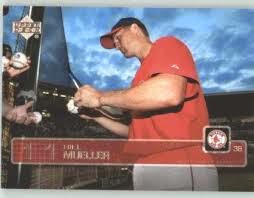 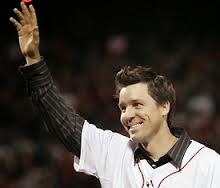