Review of The Bubble Gum Card War by Dean Hanley 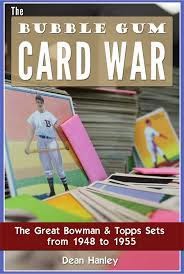 This book examines the Bowman (Philadelphia Gum Co.) and Topps (New York) sets from the late 1940s to the mid 1950s and the “war” between them. The book begins with a look at pre-World War II baseball cards then ends with a recap of why Topps won the “war”. It was fascinating to read how both companies started and about the men and women behind the cards and the companies. This book really sparked an interest in the Bowman brand for me.

Dean discusses the design, production, and marketing of these vintage issues. This really helped me to visualize how difficult and challenging producing these sets was. For example, we take color photography for granted but at the time these cards were being produced and sold color photography was very expensive so when Bowman issued a color set in 1953 it did so with only the stars in color. In 1951 Topps was the new fish in the base ball card pond and their first issues (1951 Red backs and Blue Backs) were a complete failure not only because of the cards themselves but also for the toxic taffy they were packaged with. This failure forced Topps and Sy Berger to increase the number of cards in the 1952 set to 407, increases the actual size of the card, and include a reverse with statistics and bio.

I really became fascinated with how the players were signed by the card companies. Some players such as Stan”The Man” Musial had an exclusive contract with Bowman and Willie Mays had one with Topps. This exclusivity explains why Mickey Mantle doesn’t appear in Topps 1954 and 1955. Players like Bob Feller had contracts with both companies and appeared in both sets in 1952 and 1953. Sy Berger grew up 11 blocks from both Yankee Stadium and the Polo Grounds. He would visit players in the dugouts at the three New York fields. By getting to know the home and visiting teams he was able to sign players for Topps. Bowman tried to do this but sent a woman who wasn’t allowed in to the dressing area or the bench, thus reducing her chances of signing players. Also being located in Philly was a disadvantage for Bowman because Topps was in New York with the nation’s largest market for both gum and cards. A funny story from the book is that in1952 Bowman hired a New York City photographer to take photos for the 1953 issue during the 1952 season. The photographer took all of the pictures of the players at the Polo Grounds for National League players or Yankee Stadium for American League players.

It wasn’t for lack of trying that Bowman lost the “war”, often Bowman was more dynamic and forward thinking than Topps. They often had bigger stars and more HOF players than Topps which explains the third string players included in the early Topps issues. But when it counted Sy Berger and Topps showed their prowess in marketing, signing players, and out selling Bowman.

All in all this was an interesting quick read. I have only two criticisms. First, the margins are about 1 ½ to 2 inches all the way around which inflated the actual pages (150). My wife quipped “like my students when they turn in papers”. The other criticism of the book is the lack of images of the cards. I really needed to be near the computer or my phone to look up designs for each of the sets. I recognize that copyrights were probably what kept images out of the book.
Posted by Man at 6:43 AM